There are approximately 800,000 law enforcement officers in the US. Police officers and first responders need to deal with a wide range of situations, and it is difficult and expensive to deliver training across the extremely varied situations that they may encounter.

Initial training varies by state, but averages around 840 hours per recruit. Annual training varies from 12 to 40 hours per year. Many scenarios are only dealt with classroom training, which is not always effective relative to the scenario. While police organizations do incorporate large scale live training events, these typically happen only on multi-year cycles because of the complexity and cost. 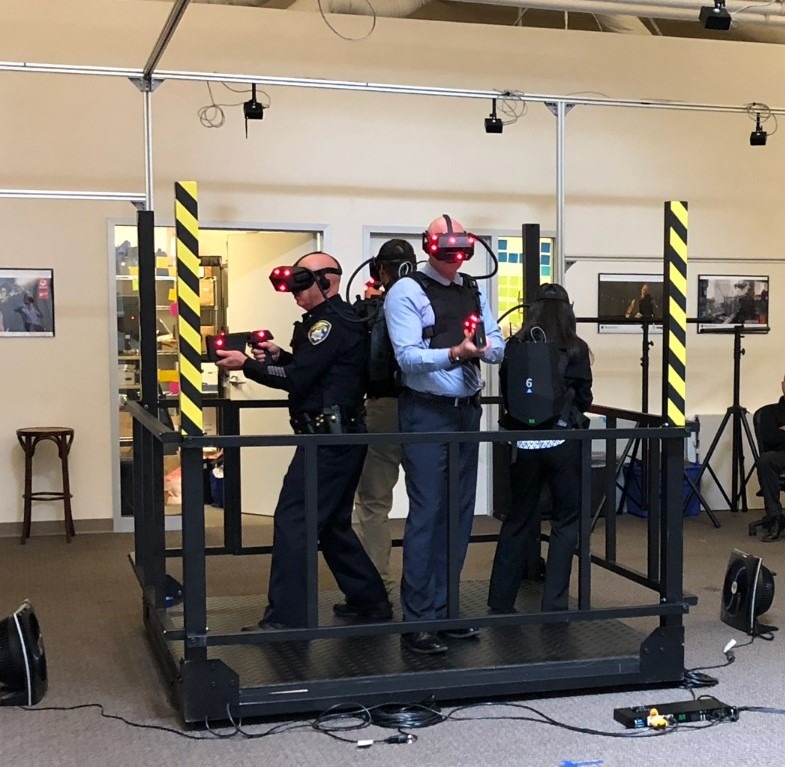 VR Scenario Training provides immersive training that can cost effectively cover a wide range of situations that would be difficult or expensive to recreate live. By incorporating high resolution motion capture cameras into the solution, the scenarios allow law enforcement officers or other first responders to work together as a team to triage and manage situations that may have multiple threats and individuals requiring assistance. The objective is to require the team to make multiple decisions on how they respond to a situation unfolding in real time. Both voice activated commands and physical interactions can change the unfolding simulation and can trigger virtual performances from the simulated characters.

As an example, a police officer and two EMT medics (Emergency Medical Technicians) might face a virtual road accident with a wet surface, a downed active power line, an unconscious woman on the ground and a man crying out from a car which is wrecked at the side of the road. They must quickly analyze the situation and coordinate what each of them will do first. The scenario can be modified by the trainer at any point during the training to add additional elements that create realism. It would not be uncommon for a rubbernecking motorist at the scene to rear-end the car in front of him, stopping traffic.

VR scenario can be valuable in a wide range of situations. In addition to the example above, de-escalation, high risk building entries, hostage situations, and implicit bias are all effectively taught with scenarios. Depending on the type of training a scenario may be a few minutes long or 30 minutes of more. Police officers are able to practice multiple scenarios in a single 90 minute training block. Since the scenario can be modified by the trainer it can be valuable to run through the same scenario multiple times and introduce unexpected elements that help prepare officers for surprises in the field.

It would be extremely valuable to do live training events much more frequently, but the cost is just too high 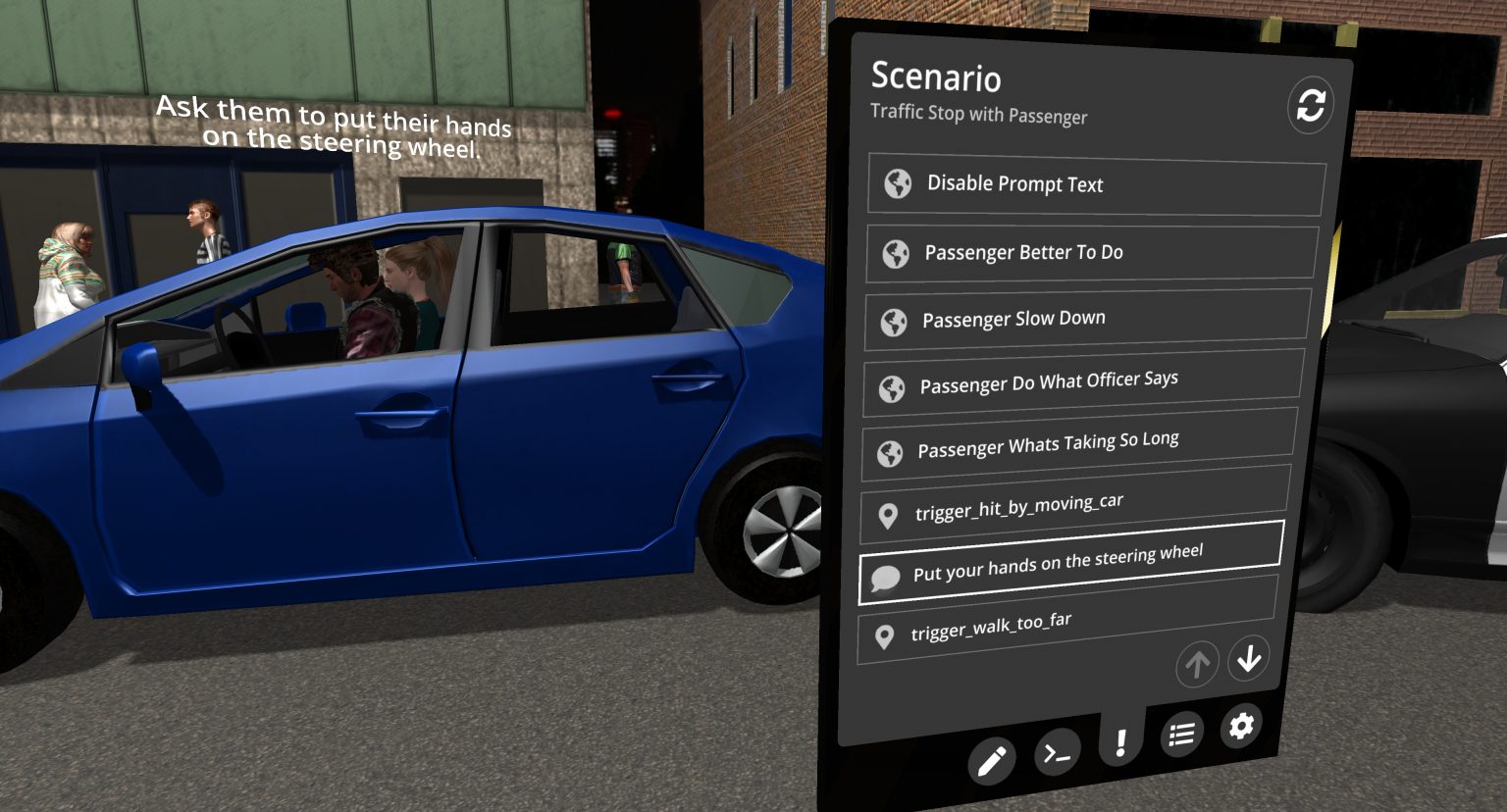 The Umajin Platform is designed for quickly creating digital processes and applications that include rich “multi-experience” interfaces such as 3D, Augmented Reality, Virtual Reality, voice and gesture control, and image processing. Umajin enables content authors to easily import 3D objects, and to create most of a project using pre-tested modules in a multi-user visual editor. The scenario builder makes it easy to import 3D assets, animations, images and audio content and create interactions using spatial, voice and trainer driven triggers for simulations, e-learning and more. It is a powerful environment for quickly developing and iterating on scenario content.

During training the Umajin scenario builder allows the trainer to control and override the simulation in real time. This allows the lesson to be more organic and to smooth out or ramp up the situation as the trainer determines is required.

The authoring tools allows a training curriculum to be quickly translated into a series of VR scenarios, up to 90% faster than using traditional platforms such as Unity that essentially use a process analogous to movie production. Umajin has been working with TEEX.org and other police training providers to create VR scenarios using established curriculums.

Umajin also integrates with the PhaseSpace motion tracking system. PhaseSpace captures motion at very high resolution at 960 frames per second, so movements in the VR scene are very smooth with almost no latency. Umajin and PhaseSpace enable the ability to locate people, tools and the pieces of the equipment accurately in the virtual space, so that they can safely and realistically interact with each other. The scenario can also accurately overlay the users’ views with synthetic people or objects, instructions, problems and feedback. This combination of VR rendering with multiple users and voice recognition all in the same co-spaced environment allows for a very realistic training experience for the police officers.

Value of the Solution

Scenarios can incorporate multiple users interacting with one another in the virtual space, providing effective training for how teams work together to manage situations. Trainers have flexibility to modify scenarios on the fly, introducing the elements of surprise that reflect experience likely to be encountered in the field.

In many ways this is analogous to the virtual reality training required of pilots. This is typically done in expensive, dedicated hardware simulators that replicate actual aircraft cockpits. This training is so realistic that the FAA allows pilots trained on a simulator to step directly into the captain’s seat of an airplane carrying passenger, having never been on the actual aircraft. The VR scenarios created by Umajin are much more flexible but create a similarly realistic training experience.

With any skill, mastery takes multiple training experiences, and mastery erodes quickly if the skill is not used. Because it is very efficient in terms of both cost and training time, VR scenario training allows officers to be trained more frequently. And because the experience is very engaging and challenging, there is a much higher level of interest in participating in such training.

Police officers face a wide range of situations that they must respond to and cannot be trained effectively for every eventuality. However, if certain situations become more common in a given district, or responses have been problematic, the platform flexibility makes it possible to quickly create specialized training that can be provided to the entire troop focusing on best practices for these field situations. 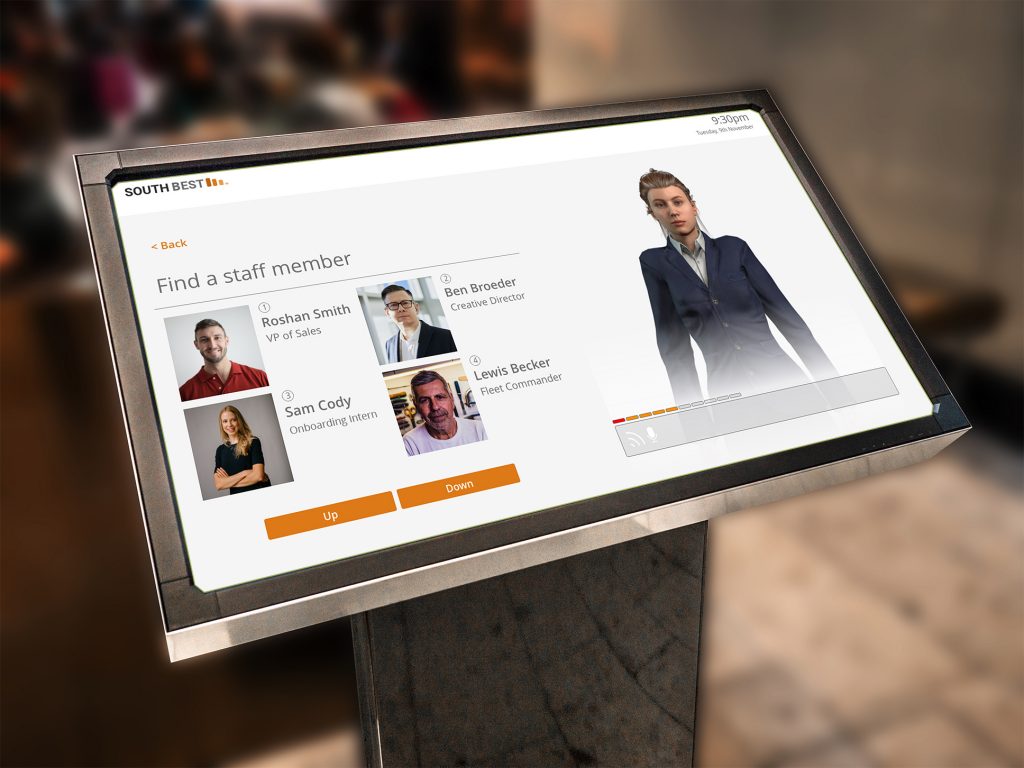 A kiosk that incorporates vital signs sensors and a digital avatar of a receptionist that can greet visitors, inquire about health status, and direct healthy visitors to the appropriate room in the facility.